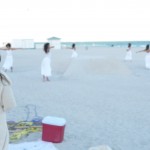 Iemanjá is the Brazilian sea goddess who is here worshiped in a ritual dance by seven women. This performance was part of Art Public, Art Basel Miami Beach, enacted on this wind-swept beach just off Collins Park, on the Atlantic coast. According to Art Public curator, Christine Kim:

Ritual life formed the basis of most ancient cultures as a codification of memory and the transmission of cultural values, yet few people today understand the meaning and origins behind most ceremonies. The centre of the performance at Art Public forms a star-shaped sand-castle on the beach, around which seven women worship the Brazilian sea goddess lemanjá, with dance and song. They provide a platform for the celebration of a live experiential space whose focus lies in evolving a social relationship between the audience and performers, while maintaining a sense of visual aestheticism and spectacle.