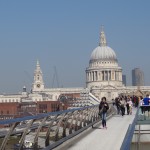 St Paul’s cathedral over the Millenium bridge from Tate Modern

Going to the Tate Galleries in London for me is like reading the New York Times. No matter what they show or write about, whether I am interested in the subject matter or not, or even if I think the whole thing banal or boring, I would still be completely engaged while in the galleries, and would gain some new insight.

Trotting to the steady drill of jackhammers along Euston road by the British Library, I was feeling the pulse of London  while dodging construction  barricades in the rain. It is of course, the summer Olympics that has London in such a frenzy this spring.

The only place for some peace and quiet would be a museum. Yayoi Kusama at Tate Modern (to June 5) was a natural first thought. I have known and followed her work since seeing her Los Angeles County Museum of Art retrospective in 1998,  Love Forever: Yayoi Kusama, 1958-1968.  My eyes were opened to the vision of the immersive environments: mirror balls in a mirrored room. Oh such fun (and of course I purchased one of those signed balls).  Pop,  Pop, Pop,  Pop… (Apparently she had set up shop in the 1966 Venice Biennale trying to sell those balls and was asked to desist by the authority).

The Tate show gave me a new perspective. It started with her early drawings as a child of 10 to her Lingering Dreams, 1949 (age 20), and with representations from  her major periods. But it was those early works that showed what a talented draughtsman and painter she really is, transforming  a vision into image with such ease.  If she had had Surrealist influences then  the pictures would still be distinctly her own. Most critics and commentators question her claim of ignorance of Surrealism while growing up in rural Japan,  as they do her conflicting themes of  self obliteration and nothingness along with her obsessive drive to be famous.

I do not see any inconsistency at all.  Popular fame is really a form of proliferation  of the self, until it is obliterated in plain sight (think Marilyn Monroe). From my own reading of Lingering Dreams, those spent sunflowers on bent, brittle stems would have been part of her natural surrounding growing up on a seed farm; and during those war years, Japan would not have had much communication with the West. And besides, most art cannot be that serious anyway, and she does not make it out to be.

On to Tate Britain (with a bit of a yawn) for some serious art.  Picasso, wow (Picasso and Modern British Art, to July 15) – sugar-coated seriousness!  Thinking being a luxury today in London,  I managed to race through quickly all the pure Picasso rooms.  It was quite nice actually because ‘pure Picasso’ rooms alternated with those who were influenced by his works of that period, from Duncan Grant to David Hockney.  It covered the period between 1910 – 1960,  the  height of Picasso’s creative output.

I more or less saw the suggested  influences, at least in the British artists whose work I was familiar with but skipped those I didn’t know too well (as I would have had to look and think very hard). What was interesting was that Francis Bacon,(probably one of the more original artists of the period, with such rich emotional overtones in his tortured images) had destroyed many of his paintings before 1944 that showed a deep Picasso influence. The exhibition managed to show a few precious ones from 1933-1935 (when he first started painting seriously) that had escaped his grasp – perhaps to him those pieces were too literal and were less of himself.

That was my insight from this show. But I had also a good run through some of Picasso’s iconic pieces, as I would have  in a monographic exhibition, by darting into the right rooms with only Picassos: Nude Woman in a Red Armchair, 1932 and Weeping Woman, 1937.

What a difference five years made: from the sensuous curves of Marie-Thérèse in peaceful happiness to the jagged anguish of a war-time Dora Maar, his new lover.