In a world that is increasingly explicit, words are written or read (and images made) in the most attention-getting way possible; and yes, tirelessly repeated too—then you get counted by Google clicks—and win. Google does not discriminate.

For example, Marx’s Das Kapital  is being read continuously on a red-carpeted stage in the main pavilion and sets the theme for this year’s Biennale—about the exploitation of labor around the world, starting with the industrial revolution and colonialism. (See here what some critics say)

In this important survey of international art today, titled All the World’s Futures, there are touching and moving images too. The best ones are those made mostly by artists years ago, across racial and sexual lines without thoughts of protest or anger; it just was and it was how he or she felt deeply about. Art that is produced explicitly to effect change feels a little coercing. But such politicizing of art is probably a natural consequence of the predominance of conceptual art in the past two decades, with the likes of Tracey Emin’s unmade bed and Damien Hirst’s pickled shark generating waves at the turn of the 21st century, and commanding the public’s fascination—art can now be used as a tool to get attention.

I get the message, in a dizzying cacophony of forms. But give me a deeper punch, something more at the gut level, not face level—something more than an illustration of all the world’s ills without hope of redemption, something like—art: something that lets me think for myself. There are quite a few works that do just that.

Dual activation of brain & body is the beauty of art

These works spoke to me at the Biennale (Oddly, they all use recycled material with the exception of the last one): 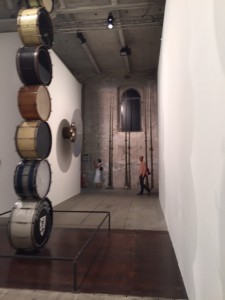 Art as witness to our collective unconscious—I cannot do better than using Adkins’ own words to describe his art on that silenced voice in all of us:

“Yeah, it feels like a form of contemplation. Contemplation and its roots in temple. Contemplation in the sense of Thomas Aquinas talking about that, and you know, it’s for meditation, really, and you could go as far as to say that, in the same way, icons are modes, are transportation to other states of being through this contemplative engagement with them. I guess you could say that these are like, the drawings are like, abstract icons that allow for the same kind of concentrated focus.” 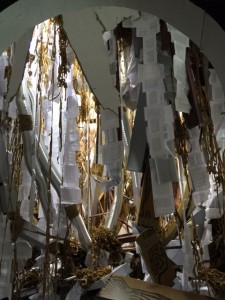 A ruin of Gothic proportions. Hirshhorn, an avowed socialist, uses everyday humble materials like cardboard and packing tapes. The first time I saw his installation at the Stephen Friedman gallery in London, I was non-plussed but strangely the image remained with me after more than ten years. This current Roof Off  has the same power to stop people on their tracks, amidst all the pristine art in the main pavilion.

We humans have a weird fascination with destruction—how children like to build blocks and then knock them down, and to crash their toy cars. Hirschhorn’s new less-scrappy ruin reminds me of Piranesi’s 18th century prints of Roman ruins and other hellish human conditions. Piranesi’s prints inspired Gothic novels and science fictions like Mary Shelly’s Frankenstein (See link).

Hirschhorn’s motto of ‘Energy yes, quality no’ is deceptive. His works are meticulously researched and planned but achieve an impromptu quality. He wants the audience to confront the material reality of the unseen, the hidden history of buildings, the ultimate decay and chaos of all systems, architectural or political. In this sense, he echoes the late Robert Smithson’s idea of entropy – my next artist.

Entropy, the idea that decay and chaos are the ultimate fate of all systems was a recurring theme in Smithson’s art. The ruined and the dead carry the real history which is hidden from the living. History can never really be told, being mixed with fresh memory in each reconstruction. Smithson was also concerned with the politics of art and commerce, the gallery system, and economics in general. Ultimately, it comes down to the earth being depleted by our greed. He said:

“Economics seem to be isolated and self-contained and conceived of as cycles, so as to exclude the whole entropic process. There’s very little consideration of natural resources in terms of what the landscape looks like after the mining operations or farming operations are completed. So that a kind of blindness ensues. I guess it’s what we call blind profit making. And then suddenly they find themselves within a range of desolation and wonder how they got there. So it’s rather static way of looking at things. I don’t’ think things go in cycles. I think things just change from one situation to the next, there’s really to [no] return.” 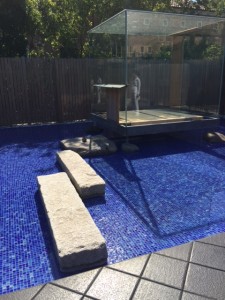 A quiet retreat behind Palladio’s high Renaissance church on the island of San Giorgio Maggiore, Sugimoto’s Glass Tea House was part of last year’s biennale of architecture. It is commissioned by Le Stanze del Vetro, whose mission is to study the history and use of glass in the 20th and 21st centuries.

Sugimoto is known for his large format photographs that often engross the viewer in the gallery and then seemingly transport him to another place, another state of being. The Glass Tea House is his response to Venetian glass-making and Mondrian’s 20th century abstraction, expressed in the quietude of the Japanese culture. ‘Mondrian’ is his transliteration of the Japanese words for “a modest house where one can hear the birds sing.”

Venice’s Murano glass-making is in peril due to age-old traditions and habits and there has been an effort to introduce contemporary artists to its old-style glass blowers to create new forms and explore new techniques (See link from the Economist). Some of the results are in Glasstress Gotika – a collateral event of the Venice Biennale in Palazzo Franchetti by the Accademia bridge. The show juxtaposes glass work by contemporary artists with medieval glass artifacts.