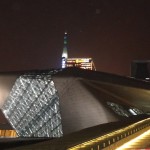 Mao had allegedly said that women held up half the sky. True or not, well, he (and China) needed workers!

One thing is for sure (I think) – Zaha Hadid has held up at least one half of Guangzhou’s skyline!

Hugging a knoll on a spectacular site on the bank of Zhugiang (Pearl River), Hadid’s opera house contributes to the skyline without even reaching for it.

More horizontal than vertical, a stark contrast to the surrounding (generally) unremarkable highrises, Hadid’s architecture is a mastery of geometry and flow, solid and void: Expanses of triangular panels of  glass or granite grace the facade, with  walls meeting at rounded corners. Viewed from the access path below,  it suggested to me a giant bird poised  to take off – with Hadid’s signature aplomb and dynamism. *

Standing apart from so much of today’s architecture looking digital and rigid, Hadid’s design always retains an organic feel, a sense of the touch of a human hand, like calligraphy. Perhaps it’s not surprising that her first interest had been biology, and had wanted to study medicine.

She replied simply: biology, when I had asked her a few years ago in London what inspired her design.

5/6/2016    *    Regarding my giant bird metaphor here. A friend pointed out to me a  famous literary tit-for-tat. A Cantonese poet went to Beijing to make his name and was greeted with a snub: “Eastern bird flying west with no place to land – there being all phoenixes [feng-huang].”  He retorted: “Southern unicorn [qilin] promenading north – all mountain beasts bowing in respect.”  (This is not unlike Los Angeles artists going to New York in the 1960s).