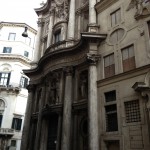 Where in the world, in which city…can you find on the same street, within a block of each other, two of the most beautiful buildings in the world? Not only that, each represents the artist’s best example, designed free-rein (and free of commission)—by the two Baroque architects who transformed a city?

It was Borromini’s rational geometry and Bernini’s emotional theatricality that set them apart and as rivals. Funnily though, the former’s church appears whimsical and irregular and appeals directly to the visitor’s innate bodily senses and instincts; whereas that of the latter is proper and orderly but feasts the eye, invoking psychological reactions, even as both aim to venerate God. One favors space, the other decoration.

Borromini’s San Carlo alle Quattro Fontane (1638-1641, also called San Carlino) is easy to miss. It is at the junction of two busy streets at an obtuse angle on a hill, on Via del Quirinale (not far  from the Spanish Steps). Walking southward on Via delle Quattro Fontane,  looking up to your right across the intersection, you can see the wavy façade of the church pulsing towards you. You can’t help but smile. It’s happy and welcoming, whimsical, even a bit mischievous. The dancing curves remind one of the ancient grotesque decoration in Domus Aurea ( Nero’s Villa, 64 AD), which had been revived  during the Renaissance.

Undulating façades are believed to be original to Borromini (1599-1667), not seen before in Baroque or Renaissance architecture. The highly original church looks like an invitation, a curtain ready to part for the actions to come inside. And it just draws you in.

The interior of the church, with an unusual oval-shaped nave that is mirrored in the dome above continues the play of curves from the outside. The intricately concave and convex entablature separates the lower wall from the upper part and surrounds the church, which is painted white, with minimum decoration. The whole space is awash with light from the windows at the base of the dome and the lantern. And, instead of being painted, the dome is filled with angular geometric shapes and crosses in white, adding to the illumination and giving structure and height to the space; looking up is inevitable in this very intimate space. Stepping outside to the cloister on the right, one notices that the rectangular courtyard is not the least bit plain: the four corners are cut at an oblique, with extra columns and creating a subtle octagon. This little detail (and those in the dome) recalls the site: the exterior corner of the church being occupied by one of the four fountains at the streets’ intersection.

Continue downhill a block is the again, modest Sant’Adrea al Quirinale (1658-1670) by Gian Lorenzo Bernini (1599-1680), Borromimi’s contemporary and arch rival. Here the contrast in style hits you immediately: a straight, severe classical façade is  softened by a small round portico, which is properly echoed in the round outline of the main body of the church behind and the curved half walls on either side. But the main space inside is a slight oval—and very daringly with the short axis connecting the visitor’s approach to the high altar. The overwhelming decorations and rich colors do not keep the eyes from looking at the altar which is illuminated by the hidden lantern above.

Bernini’s theatre is here in full swing: sculptures appear to fly and interact, culminating in the dramatic high altar with its rays of sculpted sunburst glorifying the ascendance of St Andrew to God in heaven, with angels in droves.

Bernini is said to have considered this church his highest achievement and often returned to visit in his old age, a virtual aristocrat surrounded by riches. As for Borromini, his later commissions never attained the perfection of his small San Carlino and committed suicide in 1667 at the age of 68, probably a result of his lifelong suffering from depression.

Bernini had trained as a sculptor and much of his work on St Peter’s in the Vatican was initially with the help of Borromini, who trained from an early age as a stonemason and was self educated. But ultimately, it was the pragmatic Bernini who truly understood (and often exploited) the emotional Borromini, saying:

…only Borromini understood this profession, but that he was never content and that he wanted to hollow out one thing inside another, and another inside that without ever getting to the end… a painter or a sculptor in their architecture take as their guides to proportion the human body, but Borromini must have based his on chimeras.

One could say that while Bernini’s interior choreography illustrates action and motion, Borromini’s sculpted space elicits them in its visitors, guiding them on a journey of self discovery.