ARCHITECTURE OF ECONOMY – Back to basics buildings of Sou Fujimoto 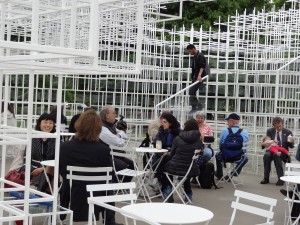 One of Japan’s rising architect stars, Fujimoto’s 2013 Summer Pavilion for the Serpentine Gallery in Hyde Park, London is astonishingly innovative and brave… where nature is not blocked out.

CAN ARCHITECTURE CHANGE CULTURE?  Dutch post-war churches may have done it

Sicilian artist Domenico Mangano photographed many of the Modernist churches that were built in the 1950s and 60s – in a hurry, apparently – in that very functional, economical, boxy way, 7000 of them. The problem is, after that the Dutch stopped going to church. People thought that they could not tell a church from a factory.  The buildings became derelict, many were subsequently sold and used for other purposes, including a supermarket, even a mosque.

Domenico Mangano’s Werken is Leven (Working is Living), at Magazzino, Rome  (5 June – 10 September, 2013). The title is from writings on houses in the Dutch village of Veenhuizen, a former colony for the re-education of the homeless.