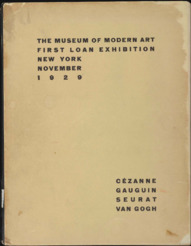 Alfred Barr, the legendary founding director of MoMA has always been, to me, just a legend. So when the MoMA exhibitions archive came live online last month, I immediately downloaded and studied the catalog for its first exhibition in 1929. I was hugely rewarded —a sort of beginning from the beginning with an expert who was very close to it.

Acknowledging the unbroken genealogy of contemporary painting far beyond that of this 19th century European group he selected, he wrote (p. 11):

‘Yet, by the painters of the first quarter of the 20th century, four men of previous generations were especially honored as pioneer who founded new traditions and, more important perhaps, rediscovered old ones.’ [All italics mine]

Monet was not included in the exhibition though he was the one closest to 1929—having died only in 1926. But he was prominent in the background. All four artists in the exhibition had died by 1906, the year before Picasso’s Les Demoiselles d’Avignon, a precursor to Cubism. It’s hard not to conclude that Cézanne is the most significant among the four—but let’s hear Barr’s story       (p.11):

‘All four had one element in common—Impressionism as a point of departure, as a background from which their individual attitudes emerged.’

‘Since late medieval times painters had been stimulated and seduced by various problems in the “realistic” imitation of nature. Anatomy, the appearance, structure, and movement …light and shade, giving the illusion of space by perspective, each of these scientific problems was solved by groups of research specialists. The Impressionists, Pissarro, Monet, Sisley, were specialists in the problem of outdoor lighting and, like that of their predecessors in science, their art was unbalanced, eccentric in relation to the great “central” tradition of European painting.’

‘For in their eager effort to represent the shimmer of sunlight they lost interest in definite convincing forms, in arrangement and composition, as well as in all dramatic and psychological values. There are few monuments in the history of art so removed from aesthetic intention and so closely approximating a laboratory experiment as are Monet’s series of “Haystacks” conscientiously painted at different hours of the day in order to catch exact momentary effects of light.’

All four artists started out as Impressionists. However Gauguin and Van Gogh dashed out the gate first with color and emotion – bringing back subjectivity (p. 12):

‘But before 1890 all four had come out of the Impressionist blind-alley, though by very different paths. Cézanne and Seurat gradually modified Impressionism but Gauguin and van Gogh rebelled against it… far more suddenly and overtly. It is not surprising therefore that their heresies, more conspicuous and more easily understood, should have become powerful influences considerably before the subtle and profound discoveries of Cézanne and Seurat.’

Barr called Van Gogh a romantic: emotional self-expression which left a legacy more in his native northern Europe: the German Expressionists like Kokoschka, Nolde, and Kirchner, at the turn of the 20th century. In France, ‘he has had no lasting influence save in the more arbitrary use of color by such painters as Matisse.’ (p.18). Color was important, as was the spiritual (p.16):

‘He seemed to feel as did certain Dutch and Rhenish heretics of the 14th century that all visible objects were informed with a physical and spiritual vitality. In his Ravine (No. 84) the strata heave and buckle crowding out the horizon. In Les Paveurs (No. 86) the muscles of the tree trunks bulge as they dig their roots into the earth. He diagrams the crackling energy radiating from a bunch of grapes. He sees with such intolerable intensity that painting alone can give him release from his torment.’

Van Gogh the evangelist [he was briefly one in Belgium] is transmuted into van Gogh the artist, the seer, the mystic, apprehending, making visible the inner life of things.’

Such emotions are not in Monet’s art: he insisted on the artist as objective observer, merely recording faithfully what was in front of him: form, color, shadow and how they interact. * Thus Barr’s contention that Van Gogh and Gauguin, being expressionistic, rebelled against Impressionism.

Seurat’s pointillism sought to eliminate further the personal and the emotional by reducing a painting to points of color according to his theory (p. 26):

‘Seurat was the inventor of a method, the constructor of a system without parallel in the history of art for its logical completeness. What other man, artist or layman, came so near realizing the 19th century illusion of possible perfection through science?’

‘But Seurat, the artist, was greater than Seurat, the scientist. In his work, from the least drawing to the most elaborate composition,great intelligence is completed by consummate sensibility.’

Cézanne too modified Impressionism—also by studying the old masters like Delacroix and Poussin, before moving forward, as Seurat did. However, he was less interested in color than the tones that make up form: the folds of a dress, the planes of a leaf in constant motion. He thus had to change his viewpoint continually, creating a sense of movement in order to (p.20 -21, quoted by Barr):

“…make of Impressionism…something solid like the art of the museums.”

“What we must do is to paint Poussin over again from nature.”

“I work very slowly… for nature appears very complex to me and the progress to be made interminable.”

“An optical sensation is produced in our eyes which makes classify [grade] by light – half tones and quarter tones – each plane represented by a sensation of color.” **

Luckily, Cézanne was not under financial constraints. Despite initial objection to his son becoming an artist, Cézanne’s father did leave him a comfortable legacy in Aix-en-Provence, where he lived and painted till the end of his life.

Barr leaves no doubt as to the greatness of Cézanne’s art, placing him between Poussin and Picasso because “[Cézanne] insists both upon the importance of tradition and the validity of contemporary discovery.”  (p.21):

“The grandeur of Poussin is perceived, is read. It remains as it were at arm’s length. But a great Cézanne is immanent. It grows around one and includes one. The result is almost as hypnotic as listening to great music in which strength and order are overwhelmingly made real.”

Barr writes of the two most important aspects of our visual perception: color and form. He writes of how the two diverge: Van Gogh and Gauguin took up the more emotional color; Seurat attempted to systemize color use; and Cezanne explored the more rational geometry of form with tones rather than color. Mass and form constitute the primary act of seeing while color perception is secondary and more conscious—according to what we now know about visual perception. But why is it that color catches us first whatever we look at?

Next month I will write, from the standpoint of today’s neurobiology of visual perception, about the lasting legacy of Cézanne’s work and how, in Barr’s words:

‘…Cézanne arriving by infinitely trial and error at conclusions which changed the direction of the history of art.’

*    The one exception is an early portrait by Monet of a newborn child (probably his son) in a bassinet. It was in the London Royal Academy’s Monet show in 1999. I came upon it at an obscure location in the show and was struck by the intensity of emotion in it despite the spare and wispy watercolor sketch. Monet kept his sentiments only to his portraits—mostly of family and close ones.

**    This is what Cézanne called his ‘petite sensation’, a very important discovery on his part—with clues to current neurobiology of perception—and subject of my next month’s blog.