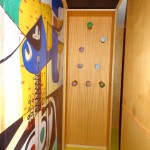 In 1949, le Corbusier, while vacationing in the south of  France, sketched the design for his holiday cabin in Roquebrune-Cap-Martin (completed 1952).

Exquisitely reproduced, the interior of the cabin was recently on display in le Bon Marché in Paris, in its furniture department. It demonstrates how little space one really needs to live – and the simplicity was important for le Corbusier because it afforded thinking, and thinking clearly.

Corbusier’s  cabanon is an expression of  his concept  of  le modulor,  a set of  ideal mathematical proportions that he believed combined  the efficiency of the mechanical and the beauty of the  biological systems, the metric and the Imperial measurements.

This was, of course,  ultimately a quixotic quest. *   Perhaps his own sense of confusion when attempting to explain it to Einstein  back in 1946 had already told him as much.

What le Corbusier eventually relied on was his own visual esthetic – and what extraordinary esthetic!

* We still don’t know, for example, how people can tell the difference between mechanical and biological motions. But apparently babies as young as four months seem able to do it – essentially biological motions are much more subtle and intricate. And it is these motions that artists use to paint their pictures (with their hands and arms, and body) – and I believe it is detectable by our visual system, probably unconsciously.

2015 05 02    The Pompidou Centre in Paris just opened a retrospective of Corbusier  (Swiss French, 1887 – 1965), covering his entire oeuvre: architecture, painting, urban planning, design, and theory. Le Corbusier: The Measure of Man (4/29/2015 – 8/3/2015) emphasizes the primacy of the human body as his starting and ending point: the production and perception of art and architecture. The exhibition opens with  Corbusier’s le modulor (1944).