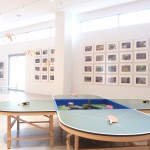 Although he keeps up on the latest science, the Mexican artist  Gabriel Orozco is careful to keep a distance.

He said so during an artist talk at  Art Basel Miami Beach this week. Although he  believes that art is ‘an unfolding of memory’  and is interested in how the body is involved in the production and appreciation of art,  he apparently thinks too much science is not a good thing for artists.

Ariane Koek, director of Collide @ CERN, the artist residency program at the particle physics laboratory has also found that out from her own research on programs that bring scientists and artists together. Koek observed  that when an artist began to think like a scientist, he lost his creativity. (See my post When Einstein Met le Corbusier).

Scientists need to design experiments, and then carry them out in order to do it. They cannot do it by intuition alone, as can writers and painters.

He also agreed that artists and scientists should exchange ideas but not necessarily collaborate – obviously because their working methods are different.

For me a major difference is that scientific work needs to be repeatable and provable by  another experimenter; while artistic work is unique and highly subjective. But at their respective best, they both reveal truths about us and our world.