Pittsburgh is the place to go this fall, winter, or spring.
The 2013 Carnegie International (October 5 – March 16, 2014) is a breath of fresh air, sparkling with gems throughout the show. Roberta Smith in the New York Times calls it a Global Extravaganza, but on a human scale. 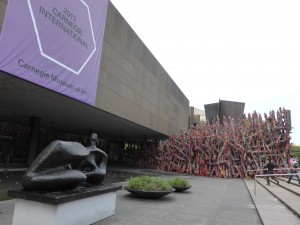 Oblivious to the imposing monuments looking on: Henry Moore’s Reclining Figures (1957), and Richard Serra’s Carnegie(1985), Barlow is here singing Hey Ho Come to the Fair. The artist had been worried (some) about how Mr. Serra would react to this playfulness in front of his spartan statement. As Peter Schjeldahl said in the New Yorker, it’s like dragging a samurai into a pillow fight, macho vs feminist.  Good, Hunter and Gatherer, let’s call it. 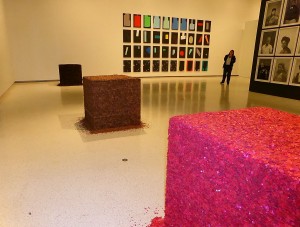 Lara Favaretto, As if a Ruin (2012): Each cube is 700 pounds of custom-colored confetti compressed for the show – they will fall apart towards the end of the exhibition. The chocolate piece in the middle looks like a piece of cake.

(Far wall) Sadie Benning, Locating Centers (2013): Forty hand-cut and painted pictures based on the artist’s iPhone drawings. They disturbingly challenge the viewer’s perception of the analogue and the digital, organic and synthetic, natural and artificial.

(Right wall) Zanele Muholi, Faces and Phases (2006-13): A wall of portraits of individuals each with his or her own style and attitude. They are from South Africa’s invisible LGBTI community, still fearing violence. There’s dignity and fortitude in their lack of pretension. 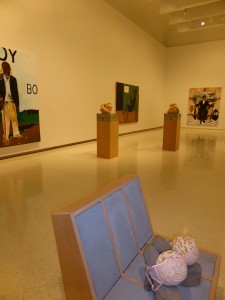 Uncomfortable and uncompromising is how Adrian Searle of the Guardian  described Lucas’ art. A member of the Young British Artists (YBA) that emerged in the 1990s and a buddy of Tracey Emin, Lucas has flown under the radar for far too long. Known more as the “bad girl”, she makes grotesque objects of the male gaze, with laughter under a straight face. But now her art  has taken on tradition itself, the male dominated field of classical sculpture. Daniel Baumann, co-curator of the Carnegie International says, “If traditionally sculptures transform the (female) body into an object, Lucas transforms the object back into a body”.

*  For a less polite look at Lucas’ oeuvre, see her current retrospective  at the Whitechapel in London (to December 15) which includes her latest shiny bronzes. 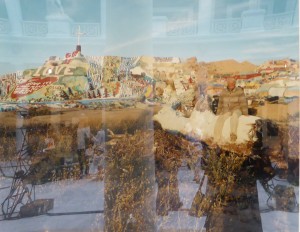 Our twin yearnings to belong and to be alone is Sternfeld’s theme for Sweet Earth (2006), a series of photographs of communities that have sprung up around the United States, around one man’s passion, and beliefs. From religious awakening to artistic experimentation, pacifism to naturalism, to simple escape and pragmatic survival, these poignant photographs show “irony, ecstasy, sadness, loneliness, controversy and frequent abandon”. 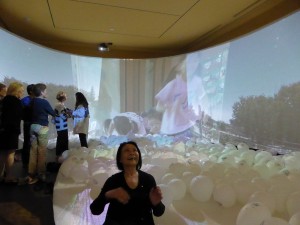 The Playground Project underlies the spirit of the 2013 Carnegie International, that “museums are places of learning and social exchange” – Lynn Zelevansky, director of Carnegie Museum of Art. If playing relaxes, relaxation backgrounds creativity.

Playgrounds came as a result of the need for inner city children to have some space outside of cramped apartments and many were inspired by the creative play and construction found in these poor neighborhoods’ abandoned lots. But now as a result of safety and legal liability, playgrounds have become standardized and mass-produced, and their learning and memory-making potentials reduced.

Before cities, there was no need for playgrounds.  Every child who grew up in the country remembers his favorite hiding place, his tree behind the barn, where he goes to be by himself or play with his best friends. I wonder how many of us remember our favorite playground growing up? 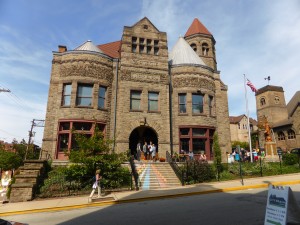 It was pure community spirit that resurrected the Braddock Library in the late 1970s, after it had fallen into disuse and closed. The first of 1,679 Carnegie Libraries in the US, it is still today a community center for this former Milltown, true to Andrew Carnegie’s wishes.

A group of local artists formed Transformazium to collect artworks to be lent to library patrons. It has so far around 100 pieces, including those donated by the 35 artists in the Carnegie International, of which the lending project is a part.

Building libraries was somewhat of a passion of Andrew Carnegie— in all he donated $55 million around the turn of the twentieth century to build 2,509 of them, including those in the US. Too poor to continue his education as a young man, he depended on libraries to further his learning.