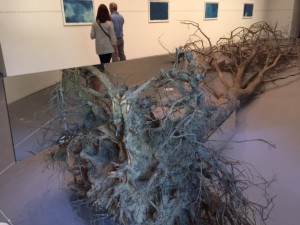 “When you look at the issues facing society now—whether it’s health care, climate change, terrorism, energy—these are the kids who have the most potential to solve these problems,” says David Lubinski, professor of psychology in Vanderbilt University in Tennessee. “These are the kids we’d do well to bet on.”

Lubinski is involved in a long-term study of exceptional youngsters—in the top 1% of college entrance scores—started in 1972 by Julian Stanley, then at Johns Hopkins University, Maryland. Four years later, in addition to mathematics and verbal reasoning, Stanley, on a hunch, started measuring the gifted youngsters on spatial ability:

“…the capacity to understand and remember spatial relationships between objects.Tests for spatial ability might include matching objects that are seen from different perspectives, determining which cross-section will result when an object is cut in certain ways, or estimating water levels on tilted bottles of various shapes…”

The study, which has followed these exceptional individuals for over 40 years, and who are now at the peak of their careers, shows that spatial ability accounted for an additional 7.6% of performance on top of the SAT scores.

I believe, however, that the extra 7.6% has even greater implications for all of us the 99-percenters. That’s because spatial ability is innate—and it can be better developed. Art is an easy place to start.

Spatial ability is inborn—all of us, including monkeys and more, have it. Animals need to judge distance, shape, size, color and texture of things, plus how these things move. There are specialized cells in the retina of our eyes that carry these bits of information to our brain for both immediate action—grab that banana; and for future use: remember where that banana tree is, and when the fruit ripens.

These two types of retinal cells form two somewhat distinct pathways from our eyes and visual cortex: the dorsal stream for immediate action—how to position and shape my hand and movement to grab that banana. It’s egocentric: the banana as it relates to me. It’s largely color blind but very concerned with shape, size and location—and movement—the ‘where & how’ stream. Children learn movements to put food in their mouth by imitating adults (via mirror neurons). The memory is encoded unconsciously; often called ‘muscle memory’ by dancers and actors.

The ventral stream, on the other hand, carries information about the details of the banana: its color, texture; and enables it to be remembered as a banana and not a tamarind pod. It is also called the ‘what’ stream and is allo-centric—allowing us to remember and compare the banana to other things: how it’s not a rock or a dragon fruit. This information—the details—is sent to the prefrontal cortex, our thinking brain, for storage and analysis. It is conscious—we are aware of what we are remembering.

Thus the dorsal stream satisfies our immediate needs without much concern for others. It’s ‘in the moment’. It is also the first one to develop in the animal kingdom and it has many virtues including judging location and size relationships, something that even pre-reading children learn every day. It is also the stream that’s essential in making and viewing art (or any daily scene)—often with the help of the analytical ventral stream as the two communicate along the way. Some art, like conceptual art, moves further up the ventral stream to the analytical prefrontal cortex—passing through the math and language areas along the way. But all art, and all our perception, starts by engaging the unconscious dorsal stream.

Looking at art, especially abstract art where proportions are intuitively arrived at, we can train our eyes, and brain. Since abstract art does not represent anything in the world, like an apple or a person (that could carry emotions of hunger or likes and dislikes), it engages our brain without judgement.

If we think for a minute, all the pressing problems today: healthcare, environment, energy, and terrorism, are created by humans—would it help if us the 99-percenters stop creating them? We are so busy chasing the heroism of putting out fires, killing criminals, curing cancer…but have we thought about preventing them to begin with—by producing better humans? And healthier ones too who don’t get sick so much? Has our education system and society in general given us the 99-percenters the same attention and opportunities? How much money is invested in research and technology vs. the humanities?

Art’s ability to enable us to see a scene in one instant, to encompass multiple viewpoints, to see all aspects of line, form, color and texture is intimately linked to our emotions and our reason via the two streams. And most importantly it allows us to ask our own questions, to form our own opinions. But the study of art and literature does not seem to have much effect on our humanities nowadays because they are not considered important. This is because for centuries, art has been made to serve a purpose: the representation of something real (which makes art false—artefact). The same is true of fiction: telling a true or made-up story of human interactions, tragic or comic. Both aimed to embody emotions and tickle the senses, seldom reason. Worse, both have been hijacked by religions or regimes to serve their propagation: advertising and promising certainty where there’s none; enforcing inhumane laws with one-shot solutions that create worse problems. Dictators don’t want thinking people: the brutal Chinese First Emperor (Qin Dynasty, 221 BC – 206 BC) burned books and buried scholars. Hitler persecuted artists who made what he called ‘degenerate art’—modern and abstract art that did not serve Nazi purposes.

Modern art, starting in late 19th century with the likes of Monet and Cézanne, started to turn a critical eye on our eyes and brain —our own perceptual system which encompasses not only emotion but reason—our own critical thinking. This resulted in the flourishing of abstract art in the 20th century, leading to conceptual art which questions language itself; and ultimately politics and systems. Many neuroscientists have now turned to art to guide their research of our eyes and brain: Margaret Livingstone of Harvard and Michael Marmor of Stanford are just two examples. Art has made science pay attention. See here my piece earlier this year about the neglect of visual literacy in our education system.

The truth is, the humanities make us better humans: seeing and judging for ourselves—and allowing others to do the same. And most of us would judge life to be worth living and making better. If we the 99% are more aware of what greed and caprice could do, how surplus production saddles the Earth with fossil fuel consumption and oceans of plastic waste that’s engulfed by microorganisms—that will one day end up in our system… And the pathology of gluttony—eating more is more. When most of us are healthy and happy with ourselves, I am certain the one-percenter ‘mathletes’ will be able to turn their attention to more urgent causes—like healing our dangerously depleted Earth.

Sadly, learning the humanities and the 5000 years of history, learning to see through the eyes of wise men and women is a very time-consuming process: like rain water percolating through the Earth to form clear deep springs. And engaging our eyes and brain is work that takes efforts—and does not yield immediate results. How do we give ourselves time?

*    Few artists in the 20th  century have spoken more passionately, more eloquently, more poetically—and prophetically —about the ultimate chaos that awaits us on this finite Earth; or with more rationality. Robert Smithson  (US 1938-1973) cited science: the concept of entropy. From the Mayan ruins in Yucatan to the the post-industrial wasteland of discarded shopping carts in his native Passaic, New Jersey, his art speaks of our human instinct to conquer and destroy—then move on.