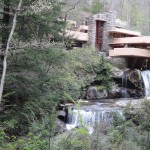 Trip of a lifetime!

Wright had surprised, and occasionally tested his very indulging, enlightened (and deep-pocketed)* patrons, the Kaufmann family, back in 1934 when he presented his plan for the family’s mountain retreat outside Pittsburgh.

Situated on a site with two waterfalls, at an angle to each other on a bend of the Bear Run in the Allegheny Mountains (southwestern Pennsylvania),  the house built by Wright does not have  views of the falls, as the family had expected, but sits over the upper fall. He had designed it for someone “who liked to listen to the waterfall.” According to Neil Levine, in Fallingwater (2011):

“Wright privileged the aural over the visual and thereby gave precedence to the continual over the momentary. Hearing takes time and gives to time the depth that vision lacks.”

“Hearing also blurs boundaries and distinctions and renders them fluid in contrast to vision, which specifies, clarifies, and reduces the flux of nature to discrete, controllable, knowable entities.” **

We toured the house and grounds, and with a memorable dinner generously planned for  the Carnegie International Friends came away bearing deep appreciation for Wright’s genius and humanity, and that of the Kaufmanns. How can one not—especially after stimulating conversations in front of a crackling fire on a chilly Allegheny spring evening, in twentieth century’s “greatest house” ?

The house is of course far more than aural, it is also visual and totally sensorial – from the ripply polished river stone flooring to the fireplace and hearth carved half out of the existing bedrock,  to the low-slung sofas, the place is to be experienced as it is to be seen and heard, and most of all, to be at one with nature.

** Vision too, can have depth in time – time in our brain/body, in our memory, conscious or unconscious, that can be evoked by a scene.  But because of looking’s ‘reductive’ nature – we take in small bits  at a time by our eyes’ small focal field, and reconstructing the complete setting in our brain –  it actually allows for deeper feelings and wider perspectives but would not be as easily relaxing as the constant rumble of a waterfall.