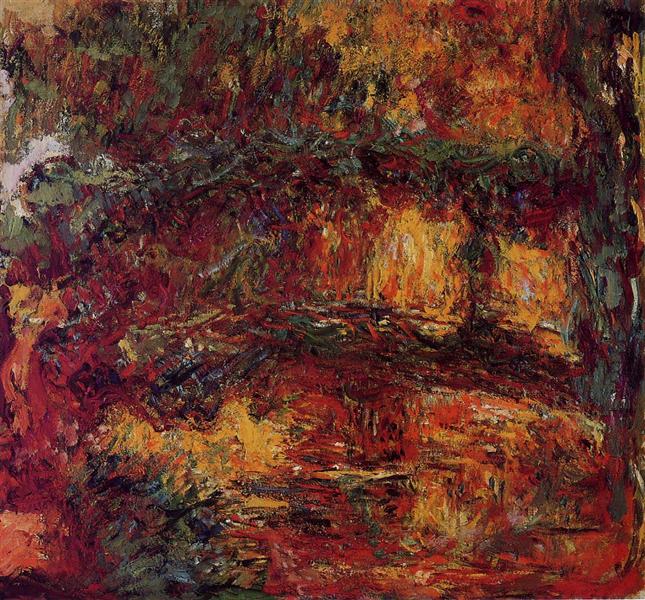 In his late seventies, and nearly blind with severe cataracts, was Monet ‘experimenting’, painting ‘modernist abstractions’? Many have long claimed just that from his late broad brushstrokes,  lack of detail and highlights, and dark, muddy colors. Others see a darkened vision of advancing age, which is true; except it was quite real, not entirely psychological.

Art can sometimes be a sort of blind faith – perhaps more on the part of the viewers than the artist himself. The truth is, unlike Degas who probably adapted his painting style to his macular disease (loss of central acute vision, with peripheral vision intact), Monet’s style did not benefit from his cataracts.

And now modern science has stepped in to prove the case.

The Stanford University ophthalmologist,  Michael Marmor has done an interesting study of these two artists’  late works.  He used medical knowledge to estimate their level of vision and then created computer simulation to show what these two artists actually saw in the paintings they produced at that stage.

Monet’s habit of painting the same subject over and over, like the Japanese bridge and the lily pond in Giverny also helped  the research. For example, in two paintings of the bridge, painted during the period of his worsening cataracts (1918-1924), one was excessively orange and the other blue, with very little details and highlights typical of his impressionist work. This is because to his compromised eyesight, with yellowed and darkened lenses, both pictures appeared the same muddy yellow-green. In a slightly earlier water lilies painting of  1914-1918, the lilies appear to be submerging into the dark muddy water below, but still with defined forms. All of these are in the Marmottan Monet Museum (in western Paris) which contains the largest collection of Monet’s paintings, especially the late works, most of them never exhibited during his lifetime.

For those who would like to see a chronological progression of Monet’s work during his worsening cataracts, between about 1917 -1922, the Marmottan is a good place to go. The collection was donated to the museum by Monet’s son Michel in 1966, with works from Monet’s estate. Many of the late works have been saved by friends and family members from Monet’s own destruction.

But the final and most dramatic proof of Monet’s remaining true to his impressionist painting style is in the Musée de l’Orangerie in central Paris. After the removal of his cataract in one eye in 1923, he completed the huge canvases of water lilies he had promised to the French nation which housed them in this specially designed museum in the Tuileries Garden, by the Louvre Museum. There we can all see his water lilies as we have always known them.